The awesome Charlie Powell created the #Lippie contest to benefit Refuge. Each contest entry is inspired by a MAC lipstick color. You can read all the great entries here. I thought this sounded like a lot of fun for a good cause, so I decided to join in. My color, as selected by Charlie Powell, is "Kinda Sexy." I'm kind of cutting it close, but here is my "Kinda Sexy" entry. I hope you enjoy it! 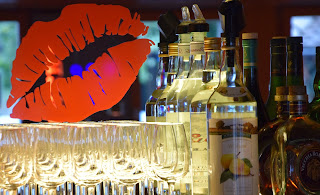 "You know what you need?"

"Better taste in men?" Viv said and tossed back a shot of tequila.

Kate rolled her eyes, then downed her own shot. "Obviously, but you need something more than that."

"Your tits are perfect." She motioned to the bartender for another round. "No, you need a mantra."

They'd been pounding tequila for the last half hour, so Viv wasn't sure she'd heard her best friend correctly. "A mantra?"

Frankly, Viv didn't think she needed anything with the word "man" in it—not after she was dumped by her boyfriend for a walking set of breast implants named Candy. Really? Candy? But since Kate was good enough to commiserate over drinks after a long workday, when she should be home with her husband and little girl…well, Viv could hear her out.

"Yeah," Kate continued once their drinks arrived, "every time you find yourself being responsible instead of following your bliss—or choosing a sensible guy instead of one who makes your knees weak—you say, 'Fuck it, I'm kinda sexy!'"

Viv traced her finger around the rim of her shot glass. "Greg made my knees weak."

"Geez, Kate, you make me sound like a gold digger." She drank her shot and slammed the glass down onto the bar. "I have most of those things myself. I didn't need him for that. It would just be nice to find someone serious to make a life with."

"I know, honey." Kate patted her hand, then scrambled to retrieved her chirping cell phone. After reading a text message, she said, "Ian's here already. Come on, we'll take you home. You're in no condition to drive."

Kate gave her a long hard look, then sighed. "Okay, but take a cab home. Have fun, but don't drink too much more. Oh, and don't take drinks from strangers."

"Good girl!" She finished her shot, kissed Viv's cheek, then headed out of the hotel bar.

Viv watched Kate cross the lobby and disappear out the front doors. The high-rise hotel was across the street from the office building where they both worked, so hitting the ground-floor bar after work was a no-brainer. It was happy hour and buzzing with urban professionals who worked in downtown Miami.

Turning back to the bar, Viv noticed her reflection in the mirror. She looked every bit the buttoned up financial analyst she was—not that there was anything wrong with that. But as she chewed on what Kate said, Viv thought it couldn't hurt to loosen up a bit. Maybe she'd find a cute guy to flirt with for a while and get her mind off of Greg.

"Fuck it, I'm kinda sexy!" she told her reflection.

Literally letting her hair down, Viv removed the pins holding it in place and shook it loose until the chocolate waves tumbled down around her shoulders. She grabbed some lip gloss from her purse and applied a fresh coat. Then she unbuttoned the top button of her blouse, then another, and yet another. Leaning forward a bit, she checked out her cleavage in the mirror. Okay, she wasn't as stacked as Candy, but her breasts were decent.

"Your friend is right," a deep silky voice said, making Viv's gaze jerk up to the tall, dark, and mouthwatering man looking back at her in the mirror.

Viv cleared her throat. "About the mantra?"

He slowly shook his head from side to side, never losing eye contact. "No, your tits are perfect."

She'd been aiming for cute, but landed drop-dead gorgeous. It would've been impressive, but this guy had "love 'em and leave 'em" written all over him. Then Viv remembered she was only looking for Mr. Right Now.

Viv was about to invite him to sit down when a familiar girlish squeal drew her attention to the bar entrance. "Shit!"

Sensible Viv would've ducked out the back way and avoided any potential scene, but fueled by tequila, she was in a "fuck it" kind of mood.

"Maybe you could help me out with something," Viv said, leaning in and putting her hand on his arm.

The corner of his mouth curved up dangerously. "I'm always at the service of a beautiful lady."

"My ex-boyfriend just walked in with the trophy skank he dumped me for."

He nodded his head. "Ah, and you don't want to be caught drinking alone at a bar."

His grin turned deadly. "I've got this."

Viv had one second to rethink her decision before he pulled her off the barstool and into his arms.

His warm breath teasing her ear, he whispered, "Throw your head back and laugh."

She did, then gasped when his lips trailed down her throat to her décolletage. He planted a soft kiss there, then made his way back up to her other ear. "Moan for me, baby. My name's Rick, by the way."

"Oh Rick, that feels so good," she honestly moaned as he nibbled on her earlobe.

"He's watching us and he doesn't look happy."

"Fuck it, I'm kinda sexy!" Viv launched herself at Rick, thrusting her fingers into his thick black hair as she captured his wicked mouth with her own.

Rick staggered back a step and landed on a neighboring barstool, obviously surprised by her sudden attack. He quickly recovered, grabbed hold of her hips, and pulled her close so she was straddling his long, hard thigh. His lips were supple but firm as he took over the kiss, turning her impetuousness into something deliciously languid.

As his tongue caressed the seam of her lips, Viv forgot everything—where they were, who she was, why she was kissing him in the first place. The world simplified and she surrendered to the moment. Opening her mouth, she met his tongue with hers and tasted him for the first time.

A thousand times more intoxicating than the tequila she'd drunk earlier, Rick made her whole body dissolve and melt into him as his mouth claimed hers. His hands had unyielding possession of her ass and were rocking her hips forward against his thigh. Her skirt had worked its way up so that only her drenched panties and his slacks separated her needy sex from his flesh.

God, if he kept it up, Viv was going to…oh yes, just one more thrust against her clit…

"Jesus, Vivian, when did you become such a slut!"

Greg's indignant interruption wasn't as bad as having cold water thrown on her, but it was damn close.

Wrenching her mouth from Rick's, Viv gave Greg a lazy smile. "Guess I just needed to find a real man to bring it out in me."

Rick reached up and fondled one of Viv's breasts. "Personally, I prefer the real thing over inflatables any day."

Before Candy could lunge at Rick, Greg grabbed her and started hauling her out of the bar. "Let's go, Candy! Good riddance!"

Viv laughed, then groaned and let her forehead fall onto Rick's shoulder. "God, I can't believe I did that. We're lucky they didn't throw us out for making such a display."

"They wouldn't do that."

Looking up at Rick, Viv asked, "Why not?"

"Because I own the place." Then he added, "Well, the whole building, actually."

Viv could only gape at him as she absorbed that information.

Rick flashed her a panty-scorching smile. "Why don't we go up to my penthouse and finish what we started?"

Once Rick got her into the elevator, he pinned her up against the back wall with his rock-hard body. "For the record, you're not kinda sexy. You're damn sexy!"

As he reclaimed her mouth and began turning her back into a quivering mass of girly goo, Viv thought, "Damn, maybe he's Mr. Right, after all."