I'm thrilled to announce that the Spy Games Anthology edited by Jillian Boyd and published by House of Erotica is now available as an ebook from Amazon US, Amazon UK, and All Romance. It contains my short story "Undercover Desires" and other thrilling reads from Ashton Peal, Anna Sky, Slave Nano, F. Leonora Solomon, Zak Jane Keir, Ella Casias, Emily L. Byrne, and Jessica Taylor.

You can read an excerpt from "Undercover Desires" below (in my previous post) and other great excerpts on the Spy Games Facebook Page.

And a big Thank You to Rachel Kramer Bussel for announcing the Spy Games release on her Lusty Lady blog and for mentioning "Undercover Desires." You Rock!

The following is an excerpt from my story "Undercover Desires" coming soon in Spy Games Anthology from House of Erotica Books. 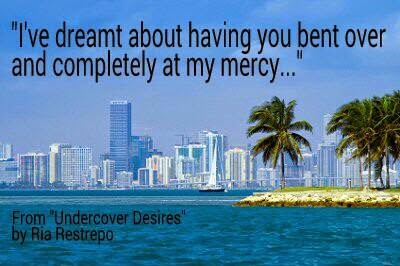 Nick hadn't even touched her yet and moisture was already gathering between her thighs. Rissa did what he said, supporting herself with her forearms, her breasts brushing the desktop. She knew she made quite a sight—backside front and centre, her skirt barely covering it, her legs slightly apart to maintain her balance.

Rissa jumped a bit when Nick's finger made contact with the back of her thigh. It was a flame licking her skin as it travelled upwards from the edge of her stocking to the hem of her skirt. His body closed in on hers, his chest touching her back.

“This skirt is very short,” he said softly in her ear. “But it'll have to come up if you want the right sound.”

Was she doing this to preserve her cover? Or to see how far it went and where he'd lead her? She didn't know anymore. Nor did she care at the moment.

Want to read more? Well, you'll just have to buy the book when it comes out. Please, stay tuned!

Ria
www.riarestrepo.com
@RiaRestrepo on Twitter
Posted by Ria Restrepo at 8:44 PM No comments:


Let me just say up front that I am half Hispanic (Colombian) and half white mutt (Irish, Scottish, Belgian, German, etc.). I've never fit into any one racial/ethnic group. I was never white enough, I was never Hispanic enough, and I was definitely not Asian, Native American, or African American/black (whatever the politically correct term is these days).

I never knew where to sit in the lunch room at school. See, the friends I made in my various classes were like my own United Nations, but when they went to lunch, they all self-segregated into their various racial/ethnic groups. This always amazed me. Being of mixed ethnicity, I just didn't get it. (This was back in the 80s, so maybe things are different now that more people are multi-ethnic.)

Sometimes, I'd sit with my black friends and some of their black friends would look at me like I had three heads. I knew they were thinking, "What the heck is this white chick doing here?" And this was repeated with my Hispanic friends, my white friends, etc.

Eventually, in high school, I joined the band, so I fit in with that motley crew, and then I joined the math geeks. Once I went to college, I thought all this racial nonsense wouldn't be such a problem. Surely people of higher learning wouldn't generalize based on race, creed, or color. Oh how wrong I was.

The university I attended, along with regular dorms, had "specialty" houses. One house was geared towards Native Americans, another towards African Americans, and so on. I lived in just a general coed dorm, but a few of my friends (which again were a patchwork of nationalities and colors) lived in the African-American house.

One day, I was visiting a few of my friends in the African-American house when they were having a house meeting. My friends invited me to sit in, not realizing all hell was going to break loose. See, the university was considering a new policy to integrate all the houses and many of the residents of the African-American house were not happy about it. And that's putting a polite spin on it.

The meeting turned into a massive bitch session about how awful "white people" were and I just sat there wanting the floor to swallow me up. I was the only white face there, so it wasn't like I wasn't noticed. My friends felt horrible and later apologized for bringing me. Of course, I told them it was okay and not to worry.

It's true, "white people" have done a lot of horrible things and I'm not going into a list of atrocities. But so have many others of various colors and nationalities. To make generalities about any group based on the actions of some is wrong.

The reason I'm bringing this up is that, yesterday, Twitter was buzzing because a white female writer (I'm not naming names or going into details) wrote something insensitive, and perhaps even ignorant, that offended many people. I am by no means condoning what this writer wrote, but I felt that some of the backlash that followed was just as bad as the comment that set the whole thing off.

Several "women of color" tweeted comments saying negative things about "white female writers." Being half white myself, this offends me greatly—to be labeled negatively simply based on my color. That's racism too folks.

It is a simple fact that stupidity comes is all shapes, sizes, colors, nationalities, religions, etc.—it's color blind. So, the next time someone says or does something stupid, how about we call them on it and address the action, not the person's color, or nationality, or religion, or sexual orientation, or anything else that insults a group of people who have done nothing wrong?

Okay, I'm getting off my soapbox now.